What is Forex trading? Let us explain it to you in a short but effective manner. Forex is the largest market in the entire world. Forex markets exchanges about $4 trillion a day, but is Forex the right option for you? 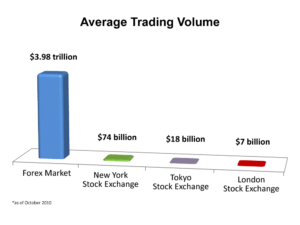 The response depends on what you’re looking for. If you want a market that never sleeps, the opportunity to swap at any time of the day, if you would like to make such moving money in a limited period, Forex can be for you. It should be remembered that you can also lose an enormous amount of money in a very short period irrespective of whether you use Forex robots or not..

Traders with very little capital can start trading. In Forex, relatively large trades with small amounts can take place for money due to advantageous leverage criteria. There are many reasons to venture into Forex trading, but before we get into the reasons, maybe we should take a closer look at the features of Forex trading.

A QUICK LESSON ABOUT FOREX – HOW CURRENCIES ARE TRADED

“Forex” is an abbreviation for “foreign exchange.” Transactions are made in two currencies. If an individual trader, a bank, a country, a company, or a tourist in a Japanese print shirt on a tropical island wants to swap one currency for another, Forex trading takes place. In any case, one currency is being bought at the same time; another currency is being sold. Currencies need to be measured with a view of maintaining value, that’s why Forex trading involves two currencies. 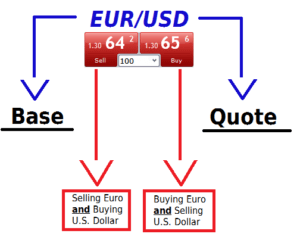 An explanation of how currencies are traded may be useful. If you’re a spot Forex dealer, and you find the EUR / USD is appreciating. You may want to buy the EUR / USD to go up. So, you’re saying that the euro currency will grow higher, and the U.S. dollar will fall. You’re buying the EUR / USD currency pair, a further way to look at this is to say you’re purchasing Euros and selling U.S. Dollars at the same time. The Unique (and also challenging to understand) feature of Forex trading to bear in mind is this: each Forex exchange includes the buying of a currency, and simultaneously selling another currency.

If you have been buying or selling on the market — the stock exchange, the futures market, the derivatives market, the baseball card market, or the used car market — then you appreciate the markets. The investor needs to buy it at some retail price, and the seller needs to get rid of it. The Forex market is essentially the market of capital, the location where speculators trade one currency for another. In certain ways, the Forex market does not vary from the stock market. The main distinctions between Forex as well as the stock market are as follows: a Forex trade entails buying one currency pair and selling another. While the symbols used to distinguish Forex pairs are standardized and formal, unlike the symbols used to label firms listed on the stock exchange.

The exchange rate of a particular currency versus another currency represents the status of that country’s economy relative to other country’s economies. If you buy, say, Japanese yen, you’re buying a “share” of the Japanese economy. You’re hoping that the Japanese economy would do fine and that it’s going to get better as time goes on. Once you’ve sold the “share” back to the market, hopefully, you’ll end up with a return.

The currency pairs listed below are known to be “majors.” Many of these pairs include the U.S. dollar (USD) on one side and are most commonly traded. The major currency pairs are the world’s most liquid and actively traded currency pairs.

The currencies listed in the following table are called “majors” because they are the most commonly traded. We would also like to let you know that “buck” is not the only term for USD. There are also: greenbacks, bones, Benji, Benjamin, cheddar, paper, gold, Scrilla, cheese, bread, and Moolah.

Currency pairs that do not include the U.S. dollar (USD) are classified as cross-currency pairs or simply’ crossings.’ Major crossings are also known as ‘minors.’ The most popular crosses are formed from three main non-USD currencies: EUR, JPY, and GBP, as shown below. 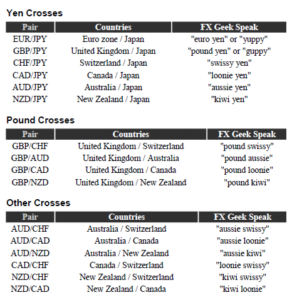 Furthermore, exotic pairs are not exotic clowns who happen to be brothers.  Exotic pairings consist of one major currency is paired with the currency of a developing country, such as Brazil,  Mexico, or Hungary.

This table below provides a few instances of exotic currency pairs.

Depending on the Forex broker, you may encounter the following exotic sets, so it’s nice to know what they are. Please note that these pairs are not as actively traded as “majors” or “crosses,” and the exchange costs associated with exchanging these pairs are typically small.

Since Forex is so amazing, traders have come up with a range of different ways to invest or transact in currencies. The most famous of these are Forex spots, futures, shares, and exchange-traded funds (or ETFs).

On the spot market, currencies are exchanged directly or “on the spot” using the current market-determined price. What is great about this business is its flexibility, accessibility, small spreads, and round-the-clock operations. It’s swift to get interested in this business, as accounts can be opened for as little as $25!

Futures are options to sell or buy a specific commodity at a fixed price on a certain date (that’s why they’re called futures!). Forex futures was developed by the Chicago Mercantile Exchange (CME) in 1972 when platform boots and bell bottoms were still in fashion. As futures contracts are structured and exchanged across centralized markets, the market is very open and well regulated; this implies that knowledge of rates and sales is readily accessible.

“Option” is a financial instrument that grants the investor the right or the opportunity, but not the duty, to buy or sell an asset at a defined price on the expiry date of the opportunity. When a deal “opened” an offer, he or she will be obligated to purchase or sell an item at a certain price on the expiry date. Unlike stocks, options are also traded on the stock exchange, such as the Chicago Board.

However, the drawback of selling Forex options is that business hours are limited for such options, and liquidity is not quite as high as the futures or spot business.

Exchange-traded funds or ETFs are the newest participants of the Forex community. The ETF may include a collection of stocks combined with other currencies, enabling traders to diversify with various securities. They are created by financial institutions and can be exchanged as securities in exchange. Unlike Forex futures, the drawback of ETF investing is that the market is not available 24 hours a day. Often, as ETFs include stocks, they are subject to trading fees and other transaction costs.

Things You Should Consider Before Buying A Forex EA Trader

Forex EA Trader - in order to be a successful Forex trader, one needs to…

HOW MUCH DOES A FOREX TRADE COST? It would require money to make money. You're going…